The Curious State of Glyceryl Stearate

Until last week this commonly-used cosmetic chemical had been something I'd never, ever thought of looking into. I hadn't questioned its chemistry or function having used it many times in many different formulations and while I knew of and appreciated the difference between the SE and non-SE versions of this (SE = Self Emulsifying indicating the presence of a little saponified fatty acid to help turn up its emulsification properties) beyond that, I had next to no interest in spending time analysing this. That has since changed.

It came to my attention recently that this particular chemical can be sold under another name - mono and diglycerides or monoglyceride or variations on that theme...

Chemically speaking glyceryl stearate is (or should be) a monoglyceride.

As someone who takes most things literally (why wouldn't you), I read this chemical as being one-part glycerine and one-part stearic acid. In my book that also makes this a monoglyceride but why call it a monoglyceride when that's less specific and useful?

The name glyceryl stearate is telling us exactly what this chemical is or so I thought...

Glycerides are esters formed by combining glycerine with one or more fatty acid.

At this point it is useful to remember that glycerine likes water and fatty acids typically like oil. Putting those two things together on the one molecule generally gives us a surface-active ingredient. In this case it's accurate to think of glycerides as having some degree of emulsification power.

Monoglycerides are where there is one glycerine attached to one fatty acid. This arrangement leaves two of glycerines functional groups (or bonding hands) free to make new friends and influence people. The fact that two water-loving functional groups are left available makes monoglycerides most surface-active and most useful to the cosmetic chemist looking for emulsification properties.

Diglycerides are where there is one glycerine and two fatty acids. This leaves one glycerine hand free for bonding thus reducing the emulsification power of this type of chemical but still leaving a little opportunity for useful surface-activity.

Triglycerides are one glycerine and three fatty acids and at this point we have what can only be described as an oil. There's no water-loving at all going on at this point.

Triglycerides dominate the chemistry of most vegetable oils and are typically used as reference points for identifying an oil and analysing its quality, features and benefits. As veggie oils can contain up to 90 or more percent triglyceride it's not uncommon for other minor oil chemistry that exists to be entirely ignored but in reality, most vegetable oils contain some di and mono glycerides plus an unspecifiable fraction within their natural chemistry and all of this is useful.

Broad vs. Narrow vs. Specific Cuts

My first 'aha' moment came when I realised that in the world of glycerides, it is quite often incorrect to assume you are buying a material with an exact and precise chemistry.

There are a few different reaction paths ingredient manufacturers can take to create an abundance of monoglyceride (of which some might be glyceryl stearate AKA glyceryl monostearate). Both the choice of feedstock oil and the reaction pathway the manufacturer chooses influence what you end up with, sounds obvious enough now it's been mentioned.

As glycerides exist abundantly in vegetable oils and as vegetable oils are readily available to the cosmetic ingredient manufacturer, it's highly unusual these days for this chemistry to come from anything other than vegetable sources with the most likely being palm. This wasn't always the case and when I first started in the industry, we regularly had to ask if the fatty acids and glycerides were tallow (beef) derived but BSE and other global regulatory changes put an abrupt stop to that. Mineral oil does not naturally contain glycerides and as such, is less likely to be the feedstock for this type of chemistry.

Generally speaking, most commonly used feedstock oils are dominated by C18 fatty acids with a typical oil having between 70-90% of its fatty acids in this configuration. C18 fatty acids are most commonly found as Oleic (C18:1) and Linoleic (C18:2) with the remainder as Stearic (C18:0), Linolenic (C18:3) and Alpha Eleostearic (C18:3). This may be why the fatty acid in glycerides is often referred to as stearate, a sort of catch-all that tells most but not necessarily all of the story. More on that later.

Once a feedstock oil has been selected the next step is to chemistrify it!

There are many reactions you can do to end up with Glyceryl Stearate, but two of the oldest tried and tested methods are a) glycerolysis or b) direct esterification. 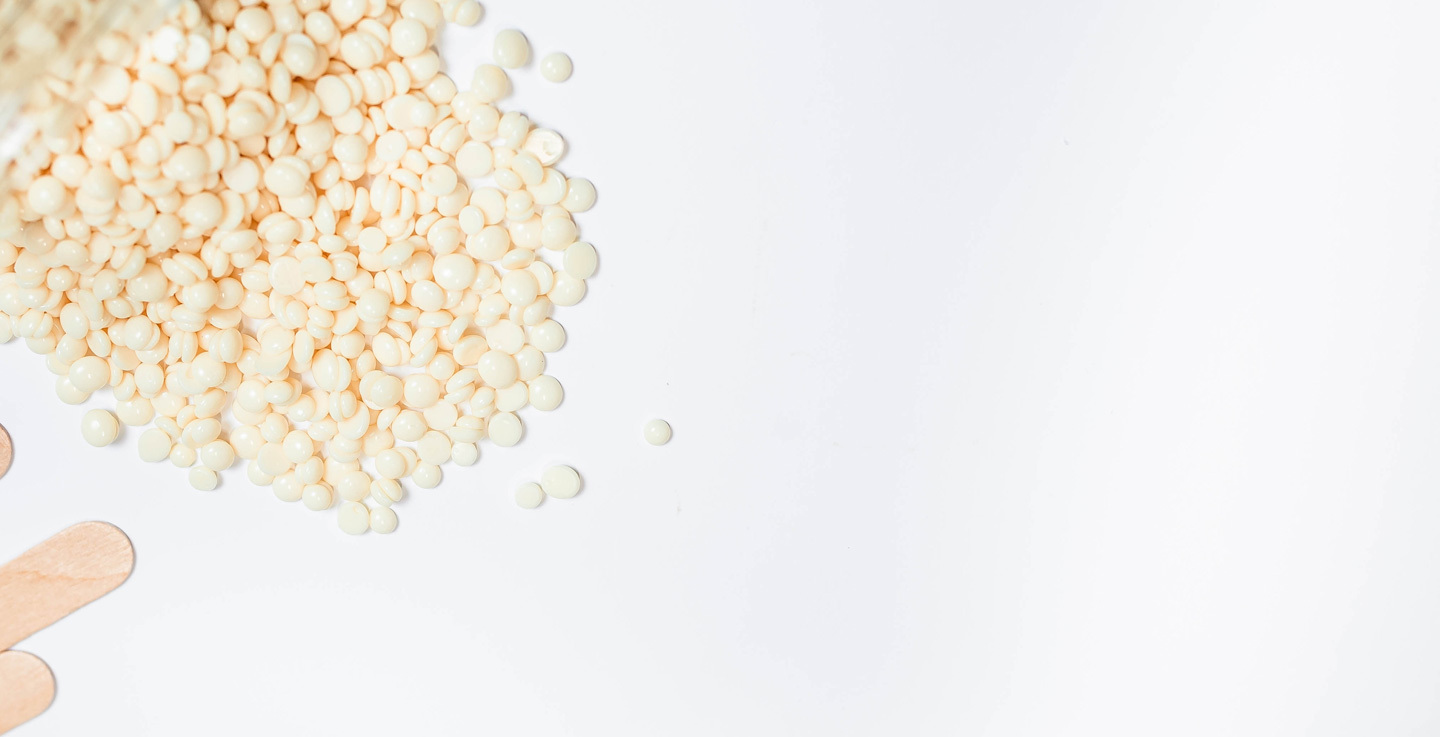 The simplest way to generate some monoglycerides involves heating your feedstock oil (triglycerides) with glycerine in the presence of a little catalyst (which could be sodium hydroxide). The catalyst isn't enough to completely saponify the oil so the triglycerides don't break up completely but the combination of heat (180-250C), slight alkalinity and extra glycerine produces just enough of an enticement for some of the triglyceride fatty acids to swap their triglyceride relationship for a new mono or diglyceride bond.

This research paper (Choudhury, R. (1960). The preparation and purification of monoglycerides. Journal of the American Oil Chemists' Society, 37(10), 483-486.)(1) contains a lovely graph to represent this change over time, showing that an almost 100% triglyceride starting material at time 0 transforms to a 26:18: 66 mix of mono:di:triglyceride after 1 hour and progresses to 40:30:30. Mono:di:triglyceride at the 3 hour mark beyond which the diglycerides increase with a corresponding drop in triglycerides to end up with a 40:48: 12 mono:di and triglyceride blend after 6 hours.

Seeing this data helps to explain what I've been seeing as I've been investigating this chemistry and what's on offer from different manufacturers. It's quite common for an ingredient manufacturer to be offering a range of monoglycerides for sale with varying percentages of mono and diglycerides. In some cases, some of these materials are called glyceryl stearate yet come with specifications that indicate they too are blends of different glyceride chemistry. It's potentially very confusing!

This reaction is what I thought was happening all along but as it's more complex and takes a few more steps, it's actually not the most common method.

Gaining access to fatty acids requires saponification of the oil (triglyceride) to fully break the glycerine: fatty acid bond. This is a common reaction within the cosmetics industry and is often the first of many chemistry steps oily feedstock goes through in order to create the exact chemistry we require for our creams, serums and soaps.

Unless specified (and paid for) Stearate fatty acid cuts typically include some C16 and all the different C18 arrangements, not just the C18:0. This isn't necessarily such a big deal and I feel in danger of becoming a little pedantic here but it is worth noting. In a manufacturing environment, whenever a variety of chemistry (or broad cut blend) can be sold under one chemical name, there's a greater potential for the ingredient to perform differently when moving from one manufacturer or supply source to the next. This is a lot less of an issue when the chemistry is precise. Further, this is likely to present as a bigger problem if these changes mean the resulting chemical isn't as strong an emulsifier as the previous version. I can see that being a possibility here.

Before we leave direct esterification behind I'd like to come back to the stearate name again and add a little detail to our understanding. As I mentioned again above, C18 chemistry in oils typically goes beyond just stearic, the saturated fat and includes mono and polyunsaturated fatty acids. These double bonds are unwelcome complications when we are trying to further react these fatty acids so often, after saponification and sorting into a 'stearate' cut, the stearate chemistry is hydrogenated to leave a C16-C18 fatty acid blend that no longer contains any double bonds. This chemistry is typically sold as hydrogenated palm stearine and is a very common raw material used by many cosmetic ingredient manufacturing factories.

While direct esterification sounds so simple and elegant, it's actually a multi-step process and one that can still result in a few variations on the monoglyceride theme.

Why Do We Use Glyceryl Stearate?

Cosmetic formulators and manufacturers will often reach for the glyceryl stearate as a co-emulsifier for their oil-in-water emulsions or as a surface-tension modifier for their oily balms. The self-emulsifying version of this chemical is more popular in our industry due to it having a higher HLB (more water-loving so better emulsification properties) but as the step that turns one into the other occurs as a final step in the process, it's not usually that which causes the issues I'll talk about next.

Both glyceryl stearate and the SE version have the potential to be based on broad or narrow cut fatty acids and be formed via the glycerolysis or direct esterification reaction pathway and this is significant. The reality is that you can be buying glyceryl stearate and end up with an ingredient that is exactly that: glycerine plus stearic acid you could be buying a blend of mono and diglycerides in a range of proportions with only 30-60% of the mix being monoglycerides and only some of that being glyceryl stearate.

Does This Really Matter?

For some applications this will not be an issue. All cosmetic ingredient suppliers know the HLB, melting point, acid value and rough chemical breakdown of the ingredient they are selling you. Generally, if you are using this as an emulsifier and the HLB is as expected, things will work out.

Where problems can and do occur is where the nuance and variety that exists within this chemistry is not understood or fully appreciated and brand owners, formulators or manufacturers change supply source frequently without fully testing new material in situ (in a representative formula). It is much more likely for cosmetic manufacturers to run into issues when the glyceryl stearate they source is predominantly marketed to the food industry as they favour glycolysis as a means of producing monoglycerides (of which glyceryl stearate is one). They do this as glycolysis is cheaper and faster plus it produces chemistry that works well for the food environment. Manufacturers and formulators are much more likely to get a higher percentage of glyceryl stearate in a narrow-cut fatty acid blend when shopping from cosmetic ingredient manufacturers. This isn't to say we can't shop around and use both, more that we need to understand the potential problems in doing this and not just focus on convenience, natural declarations, material origin (palm alternatives) or price point (glycolysis is a cheaper reaction pathway).

Don't take it as a given that you are getting what you ask for. It's not the supplier's fault, it's not illegal or immoral to sell this chemical as monodiglycerides, monoglyceride, glyceryl stearate or glyceryl monostearate. These terms are all accurate but they don't give the average cosmetic manufacturer enough information to go on. Do yourself a favour and check out the spec carefully then test out the ingredient to make sure it performs the job you are buying it for and if it doesn't (or doesn't seem to) now you have a bit more insight into why.