The Beauty Of Beard Oils

In a world where fashion is fast and trends come and go in the blink of an eye the beard trend has become something of a standout for longevity. Maybe it is because they look so very good or maybe the boy’s just love the way they feel. I took a closer look into the world of beard oils to find out what role they are having in this hirsute revolution.

When it comes to promises the beard oil makes quite a few, often saying things that make us nod in agreement and feel all warm and fuzzy before we’ve really thought deeply about what they mean by that. I thought I’d have a closer look at these claims to see if any are supported by science.

Some of the most popular claims made by beard oil brands about their products are listed below. In most cases these claims will have been constructed from ingredient literature or from the brands own small-scale experimenting rather than from any formal laboratory testing but that doesn’t necessarily matter given that no beard oils I have looked at make claims relating to the percentage improvement one will get after using said product.

So we have a set of claims that are largely subjective but with a side serving of science thrown in for good measure!

Softening the beard and nourishing the hair kind of go together so I’ll talk about them together. Beard hair is coarser and thicker than the hair on our heads, that said the coarseness of the hair on our heads varies from person to person too so we need to take a few measurements to get an average before jumping to conclusions. After doing that I’ve taken a microscope slide picture of a beard hair vs a head hair from the same person to illustrate my point: In terms of softening the hair beard hair can feel coarser and dryer than the hair on our heads and so ‘softening’ it is highly desirable, not least so it can be ‘tamed’ somewhat. However, when it comes to nourishing the hair I think we need to think about more about what we mean by this. All our hair is dead and so it doesn’t need nourishing as in feeding but it can benefit from the application of ingredients that might smooth the cuticle or lock-in moisture. Leave-on vegetable oils can be a reasonable way to do this but there is always the worry that these oils will just slide off and not grab or penetrate. Cationic functional silicon’s are undoubtedly the best way to get a good long-term ‘nourishment’ but are only suitable in products that aren’t being sold as natural or organic. In terms of validating this claim I think it is safe to say that because of the low-level, low-risk nature of these claims most people would be happy with these claims being based on the feedback of a test panel - qualified anecdotal evidence - rather than relying on a hard set of science based numbers. That said, the word ‘nourishing’ is deeply contentions in the world of cosmetic claims and one would be wise to either drop it entirely or replace it with the more fluffy ‘conditions’ and leave it at that.

As the hairs come out of the skin it is reasonable to use a product that will benefit the skin - healthy skin= healthy hair! In the case of most (but not all) beard oils the moisturising comes not from adding moisture but from locking moisture in. To do this the beard oil has to form an occlusion barrier on the skin surface to lock-in or slow-down the evaporation of water from the skin’s surface. This is a really good plan for people with dry, flaky skin but for those who suffer break-outs or oiliness it can feel a little oppressive and greasy. The greasiness is somewhat reduced by the use of light weight oil fractions, esters and silicon’s rather than pure vegetable oils but as each persons skin is different there will be no one-size-fits-all. In terms of measuring this claim moisture levels in the skin can be measured via a number of methods so this could be tested. Whether test results are required or not is another matter. Again I feel that moisturising in this context is more subjective than scientific and testimonials and expert panel results might do just as well as long as the results are free of bias.

So we touched on this above and mentioned that silicon’s and fractions of oils often feel less greasy and lighter than whole oils (Triglycerides) but not always. Each vegetable oil comes with its own grease-factor and then there is the other factor to consider with cosmetics subjectivity. What one person thinks is greasy and heavy another will lap straight up. It depends on the skin type, the dose of product used and what else is blended into the product. So we try our best knowing that science is only half of the answer! With regards to silicon’s being ‘lighter’ than vegetable oils, the density of dimethicone is around the 965 Kg/M3 mark or more depending on the length of the polymer whereas olive oil is 930Kg/M3 and caster oil is 956 Kg/M3. So weight wise silicone isn’t light. What is is though is flexible and it is that flexibility paired with its ultra-low surface tension that help it to glide evenly across a surface. So the lightness of silicone has more to do with its ability to spread out and leave a thin-film than it does its weight. As an aside the vegetable oil ester Isopropyl Myristate has a density of only 853Kg/ M3 which technically makes it the lightest option I’ve mentioned!

It stands to reason that if guys were used to getting their aromatic loveliness from after-shave that once they stop shaving they need to satisfy that need elsewhere and what better place than a beard oil. Beard oils can be fragranced with perfumes, essential oils or a combination of the two depending on the end result required. As the phrase ‘smells great’ is subjective there’s not a lot else I can add here except to say that it is wise to ensure the fragrance element of a beard oil isn’t likely to irritate and with a leave-on facial product that includes any potential for a phototoxic reaction (reaction between the fragrance/ essential oil and sunlight). The International Fragrance Association (IFRA) classifies beard oils as category 3 along with eye products so that tells me they need to be formulated for delicate skin. Why? Because skin that is actively producing hairs is more permeable than non-hair producing skin as product can travel down the active hair follicle where it may cause trouble.

So Let’s have a look at an example and see what a beard oil can do!

So I took a few drops of beard oil and warmed it in my hands before spreading it through the beard and massaging it in. This is my husband and as you can see he only has a tiny beard (bless him) but you can also clearly see the curls and wayward nature of the beard in the before treatment. I have to admit to not having taken much notice of this before but not I’ve seen how neat it can look with a bit of product I’m impressed!

The after picture was taken after the roughing up that took place in order for me to get the product into the beard. I didn’t comb it but as you can see just one little application tamed the fuzz somewhat! Very happy with that. 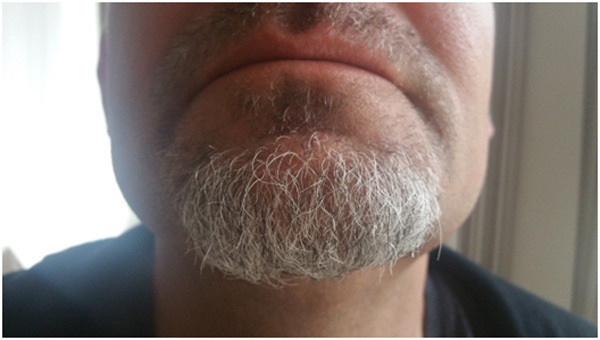 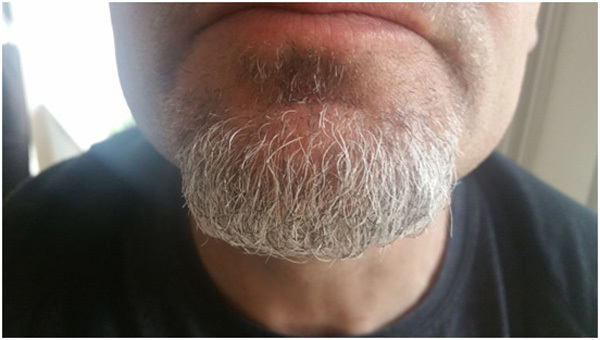 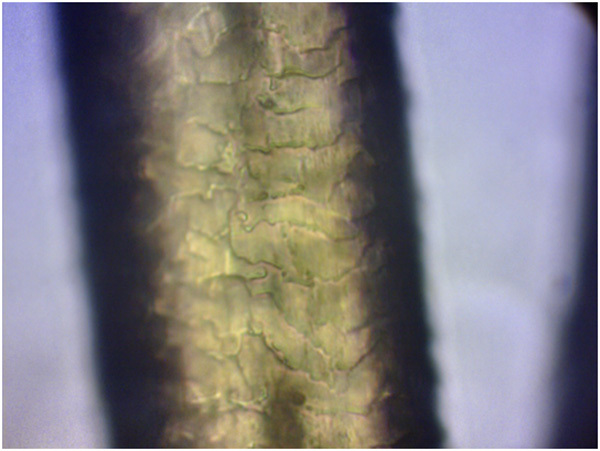 A close-up of beard hair pre-treatment.
As you can see the hair shows signs of roughness around the edges and is slightly dull in colour. 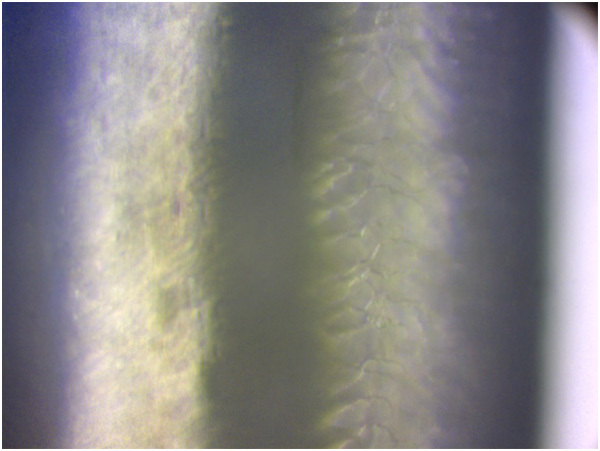 A close-up of beard hair cuticle after application.
No visible build up and pretty shiny as you can see by the reflection on the image.

So let’s have a look at an example product and see what’s in it!

New Directions have intentionally left this beard oil scent free to allow for customisation. Being a pretty robust base it would also be possible to add a few drops of other speciality oils and oil-soluble actives if desired.

The whole vegetable oils have been chosen for their quick spreadability and light feeling without greasiness, the vitamin E protects the product from oxidising and the caprylic/capric triglyceride plus Oleyl Oleate help to spread the product evenly through the hair. Lastly the naturally derived copolymer helps to both thicken the oil blend and give it a rich but drying feeling on the hair, again so the oily look is avoided.

And what’s the verdict on the skin feel?

Having not used a beard oil before I thought my husband might find it a bit greasy on the skin but he didn’t, instead he felt it was nice and soft (his words) and on feeling his beard again myself I’d tend to agree.

Given the coarse nature of beard hair it makes sense to use a grooming product that can soften and ‘condition’ the hair a little and it looks like this product can do just that. From a scientific perspective I see no reason why beard oils made of any slippy, high spreading non-irritating oil won’t work so the exact combination of ingredients you choose to buy or create would be down to personal taste rather than outright functionality. That said some of the minor claims brands want to make about skin health and benefits (anti-microbial, healing, soothing etc) sometimes do require a specific addition such as those listed below. But outside of that anything goes!

Speciality Oils and their specific claims:

More about: Beard Oil, Men, Skincare
This post has been closed; further comments cannot be added.