‘Have you gone mad’ they cry as the backroom staff at New Directions uncover their newest active ingredient and encourage us all to try it. It turns out that snail secretion filtrate isn't something that many of us (or you) have considered when looking for that perfect skin soothing and moisturizing active. Well, maybe now is the time.

But first we have to get a few things straight. New Directions is a cruelty free company and as such will not take on ingredients that contain animal parts or are gained through cruel and/or inhumane treatment of other living beings. As the cruelty free definition does allow for some 'animal' products such as honey, lanolin, milk, beeswax and of course our snail extract it isn't strict enough for the vegan market whose needs are catered for under a different certification standard. Most if not all vegans feel strongly against using animals/ animal produced by-products for human benefit. Not being a vegan I am not best placed to elaborate on this but can understand that in order for a commercially viable ‘animal involved’ ingredient to be produced the ‘animals’ have to be kept in a controlled environment - a farm, hive or enclosure of some type. Further, that particular animal's value rests in its ability to produce the goods, a task that may put a strain on it, especially if the rate at which the animal produces the material is manipulated in a way that stretches the animals capacity. This isn't a natural state of affairs and may cause some stress or dis-ease in some cases. The benefits versus costs of keeping ‘animals’ in this way varies from species to species and some, like our common breeds of sheep and cows have been living in domestic bliss (well as blissful as one can get) for thousands of years.So, as this is an applied situation (animal + environment) it is difficult if not impossible to give a blanket statement such as 'all honey production is cruel', which is what makes evaluation of the primary producer so important both to ‘cruelty free’ and to New Directions.

Turning our attention to the snail extract we first must establish its origin. Snails have been used in cosmetic treatments for hundreds if not thousands of years with preparations varying from boiled whole snail to crushed up poultices to fermented extracts on offer. The snails Hepatopancreas or mucous producing organ is still used in some cosmetic and pharmaceutical applications today but as it involves sacrificing the snail it is no longer popular in mainstream cosmetics. Instead we and most other ingredient aficionados prefer to just purify the slime or snail trail! 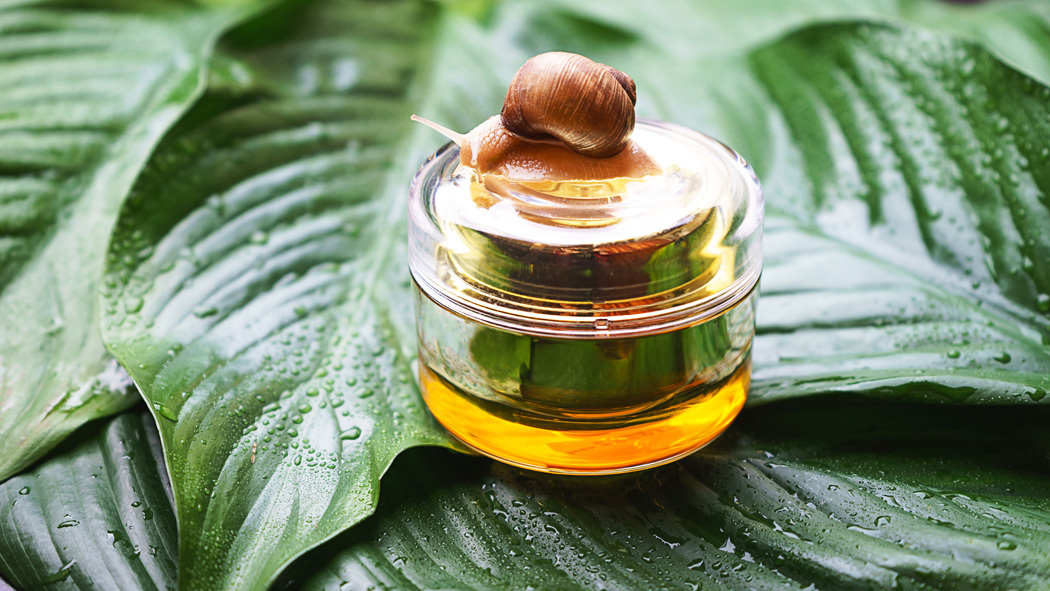 Snail Secretion Filtrate is the slippery slime trail left by your friendly garden snail as he makes his way over your flowerbed. The snail uses this mucus gel to protect its sensitive undercarriage from catching and tearing when moving over different surfaces. It also acts as a protective barrier between the surface and the skin preventing absorption of surface-dwelling microbes or other pathogens during movement. Visually I am imagining it like the snails very own red carpet, which makes it seem a lot more cosmetically acceptable!

So, in our filtrate this mucous is collected, washed and then filtered to remove any debris, dust and contamination from the surface before preserving it in a glycerin/ potassium sorbate solution.This liquid extract can then be added into cosmetics at between 1-5% to help sooth and repair dry and damaged skin.

This super-healing mucus is rich in Allantoin, Glycolic Acid, Glycosaminoglycans, Proteoglycans, Elastin, hyaluronic acid and Collagen. It works as in many ways providing moisturizing, anti-oxidant, protective and regenerate benefits.It has also been found to be beneficial in the treatment and management of scars, minor abrasions, acne and wrinkles. This makes sense given what we already know about the key chemicals present in the mucus:

Allantoin
Also found in the comfrey plant and in the amniotic fluid and fetal urine of primates this substance promotes tissue growth and repair of wounds and ulcers.

Glycolic Acid
An Alpha Hydroxyl Acid found in sugar cane and grape. Great for breaking down the bonds between dead skin cells and the top layer of skin and preventing clogged pores and dullness.

Glycosaminoglycans such as Hyaluronic Acid
A powerful humectant that helps to maintain the skins moisture content and plump out fine lines and wrinkles.

Elastin
A protein found in the connective tissue, which allows the skin to move and return to its original shape. Weak or damaged elastin can result in wrinkles.

Collagen
A protein found in collective tissue that helps to give the skin structure and volume amongst other things.

Given that our snail secretion filtrate contains all of that goodness and given that no snails have to be crushed up to produce this nutrient rich extract I for one am feeling more inclined than ever to give it a go! However if it is still not for you then you should be able to re-create the wonders of snail slime with a trawl through our active section and a bit of creative lab work.

More about: Skincare, Snail Secretion
This post has been closed; further comments cannot be added.