Articles & Recipes Articles Can Coconut Oil Protect Us from the Sun?

Can Coconut Oil Protect Us from the Sun?

When I was younger we spent a couple of holidays in Majorca, Spain which was nice for many reasons, not least that tropical sweet sunscreen aroma - sunscreen in the 80's meant only one thing and that's COCONUTS.Yummo.

But that was then and now the coconut buzz is less about the smell and more about the SPF - sun protection factor. So can coconut oil protect us from that big orange ball in the sky?

Armed with a sample of coconut oil I dashed to the sunscreen lab - Australian Photobiology Testing Facility and asked them to put it through their labsphere machine.

A Labsphere photometer is a machine that produces a beam of artificial sunlight that can be used in the non-human testing of sunscreens. It is common practice to pop any new sunscreen through this type of testing before letting it loose on humans. This is for many reasons not least so that human subjects are less likely to be burned. The labsphere also gives us a great indication of 'broad spectrum' protection as it is easy to qualitative and quantitative the light that passes through the 'sunscreen' with a machine like this. This type of measurement is impossible on humans as their skin can't be taken off and measured without the resulting gore and discomfort! For that reason we usually think of sunscreens in terms of what wavelengths they absorb or reflect when in reality the most important measure is what they let through or transmit. After all it is what gets through the skin that is biologically significant is it not?

and here are the results: 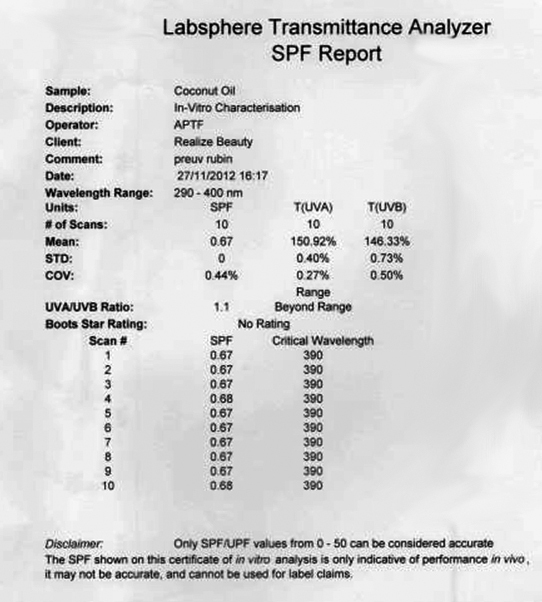 and the transmittance came out at a whopping 120% - 120%!!!!!! That means that the film of coconut oil actually magnified the light getting through rather than reducing it.I would call this the lens effect as it seems to have worked rather like a magnifying glass does on a leaf in the sun. OUCH! 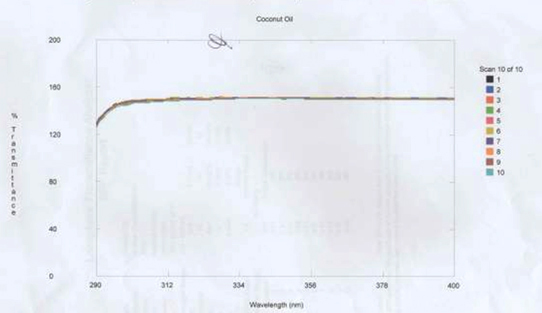 So what does that mean for our coconut oil sunscreen dream? Well not a lot of good at this stage but it pays to look further as I'll discuss in a moment.

Generally when you put an oily film onto the skin you would expect that it would help it burn, this is most often demonstrated with a joint of meat (for those meat eaters or chefs). Our skin is no different in this respect and especially if you add the oil just before 'cooking'. That anecdotal evidence does support what our machine has told us above, coconut oil is NOT a good option when used like a sunscreen.

But could you use it in other ways? After all the pacific islanders have found it useful...

Well that's why it pays to think about what oils do to the skin and to consider the oils full chemistry. Oils do help to lock moisture into the skin and improve barrier function and as good skin health is heavily moisture and barrier weighted this means that the topical application of oils is a good idea. The fact that coconut oil does have some antioxidant properties paired with a good long-term stability it is reasonable to expect that rubbing this into the skin daily is going to do some good (or at least it shouldn't do you any harm).

But that doesn't make it a sunscreen.

After all of the research that has gone behind my trio of posts into coconut oil I am inclined to conclude that the best way to think about topically applied coconut oil is as an active skin conditioner rather than a sunscreen. We are conditioned to think of sunscreens as something that we apply (ideally) 20 minutes before we go out into the sun then re-apply as required throughout the day. We are also conditioned not to use sunscreen every day of our lives and I know of nobody who would slather their baby in it from the day that they were born! No, coconut oil is definitely NOT a sunscreen.

But is coconut oil of any value in a natural sun protection strategy?

Yes absolutely. I need to do quite a bit more digging into the specifics of the chemistry that make coconut oil 'work' for the generations of islanders that swear by it but that aside there is enough goodness in coconut oil to warrant adding it into your personal care routine and while I am not able to logically quantify its sun protection benefits at this time as I said above, I can't see it doing harm just as long as it isn't used like you would a sunscreen (see above if you are not sure of what I mean).

The bottom line is that in my humble opinion for best results (and great skin health) coconut oil should be applied liberally and daily oh, and if you have any left over eat it!

PS: What I have also found while researching is that the coconut oil used in this report is not the grade used by Islanders as sun protection (they use the milk extraction method not cold pressing). As this may make a difference to the in vitro SPF (the SPF measure that we did) I will track down a traditionally produced sample of oil and run that through testing in order to compare.

More about: Skincare, Sun Protections
This post has been closed; further comments cannot be added.