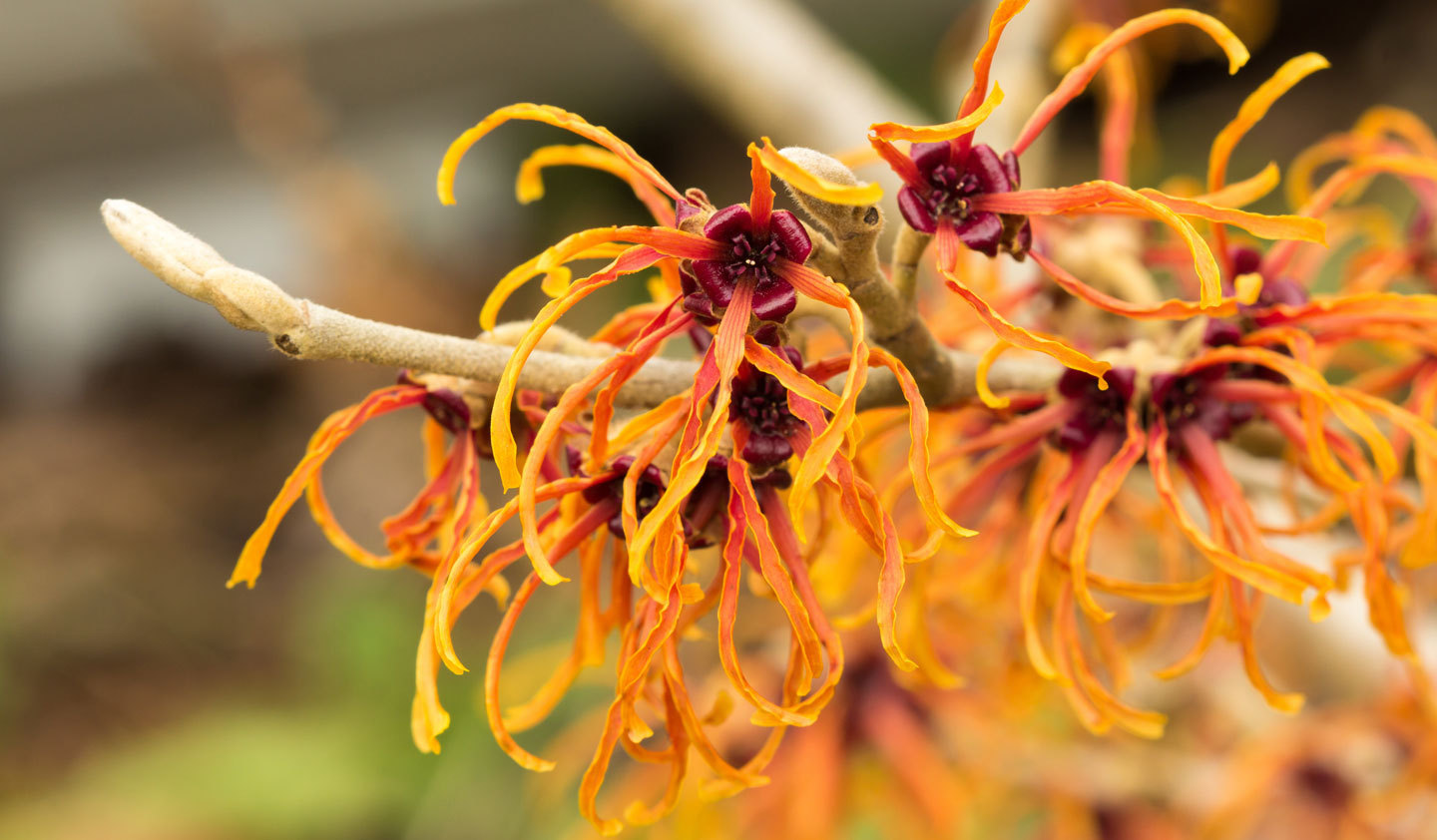 Witch Hazel has been a 'go-to' herb for many natural skin care lovers, a reliable tonic that helps reign in and calm problem skin thanks to its toning and tightening chemistry. But our appetite for astringent chemistry has waned over the last few years, we now talk of microbiome balancing, of hydrating our skin back to health rather than seeking to suppress its natural secretions. Has Witch Hazel had its day or is there still a little something left to discover?

Witch Hazel trees are small trees whose natural home is North America. Unusually, they bloom from autumn into winter, lighting up the darker days with stunning spider-like flowers of yellows and reds that attract red squirrels and ruffed grouse who eat the seeds.

White settlers observed Native American Indians using Witch Hazel branches to locate underground water sources, a process known as dowsing or divining. That's where the English name for this plant stems from with 'Wickie' or 'Wych' mean 'lively' and 'bend' in middle English. This would have likely chosen to describe the way the wood bends when water is present. Native Indian elders were also observed used this plant in the treatment of burns and other injuries and before long, extracts of this plant had made its way back to Europe and into several western Pharmacopaea.

The Witch Hazel most cosmetic chemists know best these days is the alcohol extraction and this generally contains a residual 14% ethanol carried over from the mashing up of the bark in an alcohol-based solvent in order to extract the tannins and other phytochemicals.

Bark material is quite hard and so typically needs a solvent with a bit more oomph than just water or even glycerin to soften it so that its chemistry can be collected. The residual alcohol is required to suspend and deliver the plant actives from the extract and into the skin. It's hard to find exact records of when the practice of extracting Witch Hazel this way started, whether it was traditional to brew the extract this way or whether alcohol extraction is a more European twist to the story - alcohol extraction and preservation being popular in German apothecary of the time. However, it is possible to find modern scientific papers that map the concentration of Hamamelitannin, a key Witch Hazel phytochemical in different parts of the plant after extraction. One paper found this active to be 31 times more concentrated in the bark than the leaf and 87 times stronger in the bark than in the stem. So while it's difficult to pin point exactly where this extraction formula came from, it's clear that it's a very sensible choice of methodology.

It's important to note at this stage that in today's world Witch Hazel extract isn't just one thing. Cosmetic Chemists can purchase a powder made from the bark that could be brewed up in water, alcohol or glycerine and then strained, there's a bark extract made up in alcohol to get a fuller extraction there's a leaf extract prepared in a variety of ways and there are fermented extracts which change the chemistry from an extract that is predominantly antioxidant and astringent to one that is more antioxidant and hydrating.

Many people worry about the presence of alcohol (as in ethanol in this case) in a plant extract as alcohol is known to have a drying effect on the skin. While it is true that alcohol can denature your skin proteins, alcohol is not a dermal allergen or sensitiser (people don't become allergic to it). Alcohol injury is analogous to a carpet burn - if you keep rubbing your skin at reasonable speed across a carpet you'll get a burn because of the physical abrasion. You could keep on doing that and it would keep on being irritating, your skin would probably not 'get used' to it although you may become less affected by the pain as your body becomes more conditioned to it. However, you would never say 'oh I can't rub my skin on the carpet as I'm allergic to it'. Alcohol is the same but it applies its abrasion via chemical means. The carpet rubs off your skin indiscriminately, concentrated alcohol can damage skin proteins in a targeted and knowable way but only, and this is important, when it is present as an unchecked concentrate. Without alcohol we simply wouldn't have access to Witch Hazel's useful phytochemicals so it is great news for cosmetic chemists that adding only a tiny amount of humectant to an alcohol containing formula can counter alcohol's irritancy potential leaving all of the benefits with little to none of the down side.

Alcohol aside, according to Cosmetic Ingredient Review data, Witch Hazel contains between 3-12% Tannins (leaf less, bark more) including the well-known Gallic and Ellagic Acid. Next there are Hamemelitannins which are Gallic Acid types and powerful antioxidants great at protecting the skin from environmental pollution and inflammation.

Hamemelitannins are what makes Witch Hazel special and different to other antioxidant rich extracts. These have been found to be very powerful at protecting cells against superoxide anion - a free radical important in dermatology because it's the one that causes most premature cell ageing. It's not so often that Witch Hazel is touted as anti-ageing but based on the evidence there's no reason why it couldn't be sold in that way.

In total there are around 168 constituents found in the volatile fraction of Witch Hazel bark, many of which are powerful antioxidants, anti-inflammatories and skin soothing agents. Because of this is seems disingenuous to only consider Witch Hazel when looking for a toner or pimple control active. Instead, it makes sense to consider this powerful and spiritually rich natural extract into for all of our active anti-ageing, skin balancing and environmental protection formulations. Witch Hazel is always a winning solution. 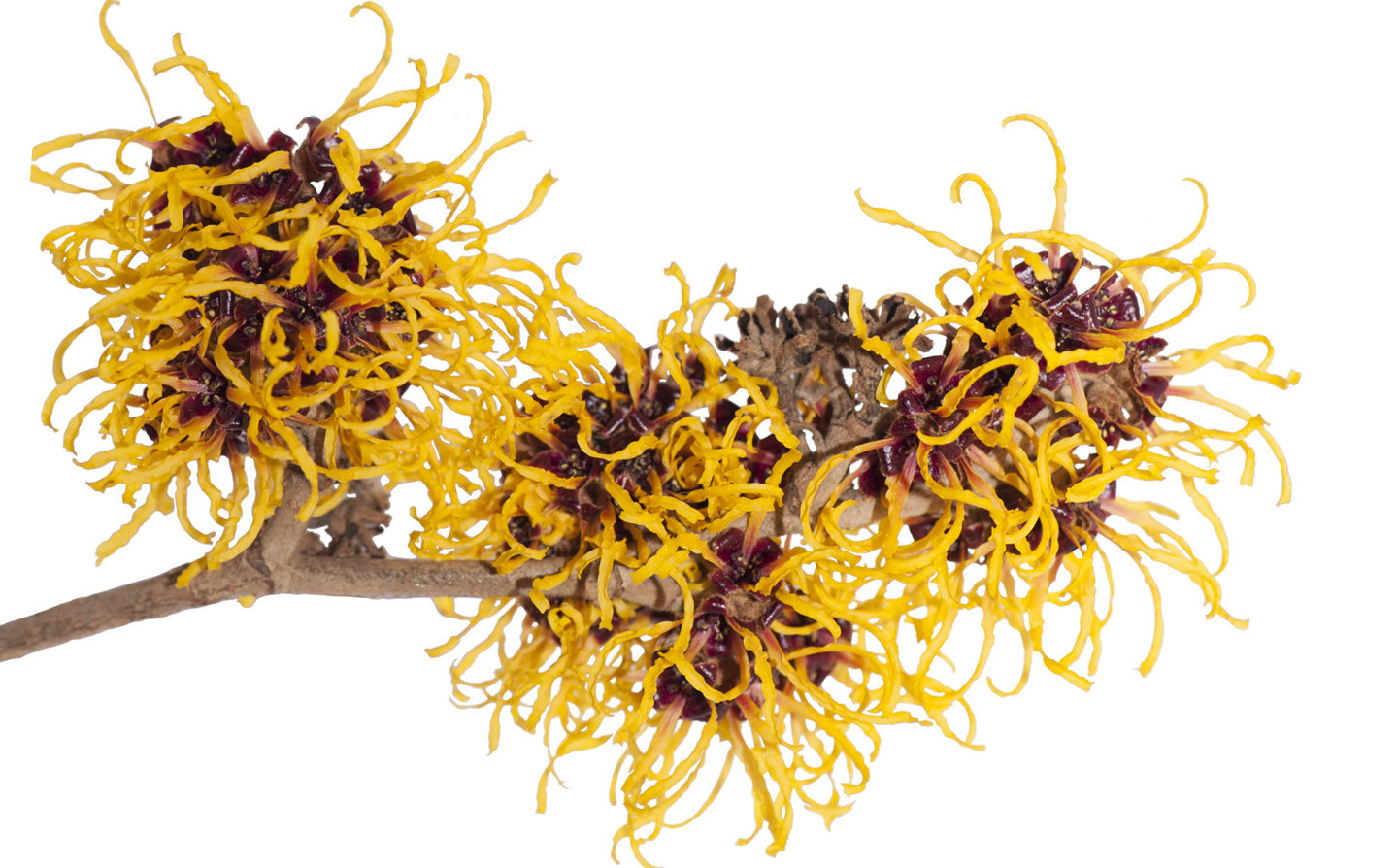