Articles & Recipes Articles Essential Oils and The Mind - How Do You Feel R...

Essential Oils and The Mind - How Do You Feel Right Now?

The other week I was talking to a client who was looking for confirmation of the Beta Caryophyllene content of the Copaifera Multijuga Resin Oil that we sell. I looked this up and dutifully found the batch we had in store to contain 45% of said aroma chemical. Curious to know why this particular chemical was of importance I asked a few questions and soon discovered that this chemical is thought to be able to bind to a particular cannabinoid receptor that we have in our bodies. I am guessing that some people were then drawn to make the conclusion that the presence of this chemical must mean Copaifera resin oil can affect your mood - maybe a relaxant or a 'feel good' chemical. I wanted to find out if that was indeed possible, especially given that quite a lot of people look to essential oils as mood enhancers.

Copaifera Multijuga resin is extracted from the trunk of the Copaiba tree which grows in tropical Latin America. The tree is fairly common, unremarkable in looks and fairly common in that region.

Apparently the resin was used in traditional medicine for its anti-inflammatory properties and these, as well as its anti-microbial and wound-healing properties have since been backed up and understood better through scientific studies. The oil has been found to assist in tissue repair which makes it quite a useful addition to cosmetic products targeting damaged, ageing and / or problem skin when topically applied but is that all it has to offer? Can it's aroma chemistry change how we feel?

One of the big issues with natural medicine or even a natural cosmetic plant based extract is that nature doesn't do things exactly and reproducibly, that while it might look like everything is fairly similar on the outside, the chemistry can vary on the inside. The fact that nature does things approximately or in a range means that it is perfectly normal to expect the aroma chemistry of Copaifera oil to sit within a range of possibilities.

The tree Resin and the essential oil quality can vary from batch to batch and year to year depending on nutrition, competition for resources and climate, plus with some botanicals there is species cross-over and that is one thing happening here. It appears that, according to this article, there are at least three species of Copaiba tree producing resin and oil of the same name so that does add a level of uncertainty to things that doesn't exist with a single-chemical pharmaceutical active. The article I've linked to there also confirms that this hasn't yet been adopted as a 'drug' or 'active' in pharmaceutical terms and that's mainly because of uncertainty as to its toxicology (animal testing is happening on this now) plus its chemical variability (hence work such as is being done in this paper).

So here are the results of the analysis of 11 Copaifera Oils - there is another page too with minor components but I didn't share that as this has everything we nee for now. These are all of the same type as I mentioned initially. 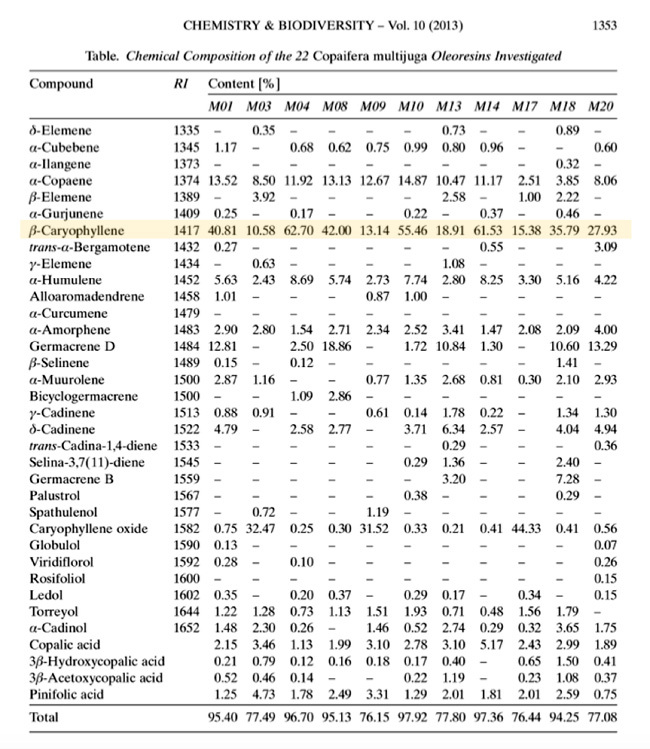 What stands out to me here is that the level of 'active' we are interested in ranges from 10.58% up to 62.70% so the oil that New Directions currently has in stock, with 45% Carylophyllene, is pretty average.

Carylophyllene is unlikely to be the only active in this oil but we will continue our focus on this interesting aroma chemical for now and continue to follow its cannabinoid receptor link.

How do Cannabinoid receptors work?

We have Cannabinoid receptors throughout our body and these become activate when triggered by cannabinoids.In our bodies these receptors influence our appetite, how we sense pain, our mood and our memory. There are two main classes of receptor as well as some, what scientists currently think are minor receptors existing throughout our bodies. The CB1 receptor family operates in the brain (central nervous system) mainly but also affects the liver, kidneys and lungs. This is the receptor that is most famous with regards to Canabinoid receptors as it is the one that is triggered through taking Cannabis, but that's not the receptor that Carylophyllene targets.

The second major receptor is known as CB2 which is expressed primarily through the immune system. Evidence also seems to be mounting for their being more receptors in the blood and lymphatic system which leads me to conclude that cannabinoid activators should be able to have a pretty big impact on us biologically as long as the activator was able to reach its target. But more importantly and interestingly it is clear that these cannabinoid receptors are not just about mood altering via a brain 'high'.

One process that involves cannabinoid receptors is the development of keratinocytes (skin cells). But more than that, this article here tests the hypothesis that CB2 receptor activation stimulates release from keratinocytes of the endogenous opioid β-endorphin, which then acts at opioid receptors on primary afferent neurons to inhibit nociception (nociception is the sensory nervous system's response to certain harmful or potentially harmful stimuli). It looks like the topical application of actives that can bind to these CB2 receptors can reduce pain sensations in the skin - this could be really useful in post-laser treatments and other healing or soothing skincare balms and with no mind-altering in sight!

So could Carylophyllene change how we feel when inhaled or applied topically?

To recap, Beta Caryophyllene is a CB2 receptor agonist so it does work with cannabinoid receptors but in a non-psychoactive way (so no high. There are several studies looking at this particular molecule and its effect on the biology of the test subject (usually mice or rats but sometimes people) of which none referred to administering this via inhalation (sniffing). This paper references many experiments that have been carried out and summarises that this active has been administered orally, intraperitoneally (animal studies) and topically where it has been found to have anti-inflammatory effects as well as having some pain relief properties.

Taking all of the research into consideration it is highly likely that Copaiba Oil can increase feelings of wellbeing in the body but not through a chemical 'high'. This natural oil is more likely to affect mood as a side effect (or even as part of) it's ability to reduce inflammation and pain and for most people, this would naturally lead to an uplift in mood and sense of wellness.

Is this fascinating aroma chemical available in any other oils?

Luckily, Carylophyllene is not just present in one essential oil, there are many more that give you access to this aroma chemical wonder material including:

For those curious to know how this aroma chemical compares to Hemp in terms of the number of cannabinoid receptors it contains here is some data:

Hemp contains more than 100 cannabinoids of which 60 are psychoactive with THC being the most mind altering and having hallucinogenic properties. Carylophyllene is just one receptor binder so its actions are much more targeted.

Nature does give us such wonderful and interesting chemistry and finding out how well our human bodies function to accept natures 'medicine' is truly fascinating. I do hope you have fun experimenting with some of these oils. Why not try incorporating one of the carylophyllene rich oils into your own massage blend or room diffuser and see how it makes you feel.

More about: Essential Oils, Wellbeing
This post has been closed; further comments cannot be added.